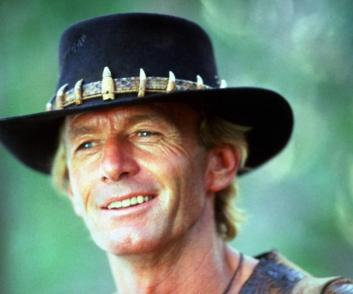 Wow have I ever been getting hits from Australia… G’day mate, how about we toss another shrimp on the barby!  Sorry, even though this Paul Hogan travel advertisement is SOOOO cliche, it not only dates me, but is still kind of funny?!  I mean after all, Crocodile Dundee put Australia on the map for most of us North Americans… well that and that Lex Luther, the evil villain from Superman wanted to rule the continent! 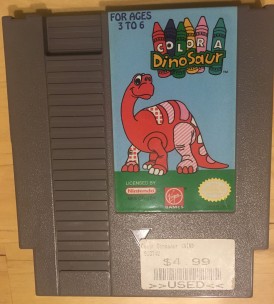 I picked up this little bad boy from JJgames.com.  It was advertised as “stickers on cartridge”, and I wish I only paid what the sticker asking price was (probably in the 1990’s).  Unfortunately, this worst ever Nintendo Entertainment System game goes for A LOT more these days!  That being said, the advertised price was fair for today’s value, plus I had a discount as a repeat customer, so it made the price even better!  But ya, it is a really dumb game where you actually have to shade in different dinosaurs… I believe within a time limit to win the game, but then again I’m only speculating as I’ve never played it, and never will!

While we are on the topic of JJgames, it is of note to mention that they sold their copy of Little Sampson for an asking price of $1350US… now this doesn’t include any discounts they may have offered to certain customers, but even at my rate the game was too expensive!  C’mon Pat (whose an NES punk!)… let your prophecy come true!  It’s a $400 dollar game, no more, no less!

For Christmas, I bought a download of Cuphead for the Segadude and I must say that I have really enjoyed playing it with him!  The graphics are in a 1930’s cartoon style are so much fun!  Now I must admit that as a big time old school Disney fan, I’m a bit bias, but I love it!  It is boss heavy, very difficult, yet super fun… if you have an Xbox One, I highly recommend it!  I will not rest until I have collected all those souls!

There has been an article in the Toronto Star about video game addiction… well as far as I’m concerned suck it up dude!  It’s not like you are sticking a needle into your vein!  Just stop playing!  I’m sure easier said than done, but c’mon, fortnite isn’t THAT good!  I must say though that it has inspired some pretty cool dance moves that all the kids know almost professionally!  The article about video game addiction… specifically related to fortnite can be found here.

Anyways, apparently the Sega Dude has a bunch of extra blank cases that have a tab on the top… I guess that is a big deal?!?  Anyways I’m supposed to bring over all my Sega Master System games over to his place soon so I can upgrade them!  Awesome!